Female Vulnerability and Trauma in Detention

According to the Immigration and Naturalization Services (INS), women held at the Esmor detention facility in 1995 were subject to humiliation and mistreatment based on their gender. As an INS report described, “female detainees reported that they had been issued male
underpants. On these underpants, which were generally too large, a large question mark had been made in the area of the crotch” and “that on numerous occasions specific ESMOR personnel refused to issue sanitary napkins to female detainees who were menstruating.”[1] Female guards would conduct strip searches, but would always do them in plain sight of male guards. Showers were open to view as well. It was humiliating and shameful for the women.[2] The majority of women in the detention center were asylum seekers escaping persecution. These women had already gone through traumatizing experiences, and placement in a detention center during the asylum process exposed them to further trauma.

Beyond the physical abuse and humiliation, the system of immigrant detention retraumatized these women by forcing them to recount the events that led them to request asylum. For women escaping persecution based on their gender—like female genital mutilation for Fauziya Kassindja—it was traumatizing, humiliating and embarrassing for them to tell a male stranger their reasons for leaving their home country at the airport in order to prove their fear of persecution. Kassindja described a visit by journalists to the Esmor Detention Center in her memoir, “We kept our mouths shut. We were refugee women from countries where women are taught to be docile and submissive. And since we were in jail we were frightened and powerless in addition to being docile and submissive. We didn’t complain. We didn’t speak out.”[3] This illustrates that female detainees were doubly intimidated to speak out or rebel under the watchful eyes of guards or correctional officers. 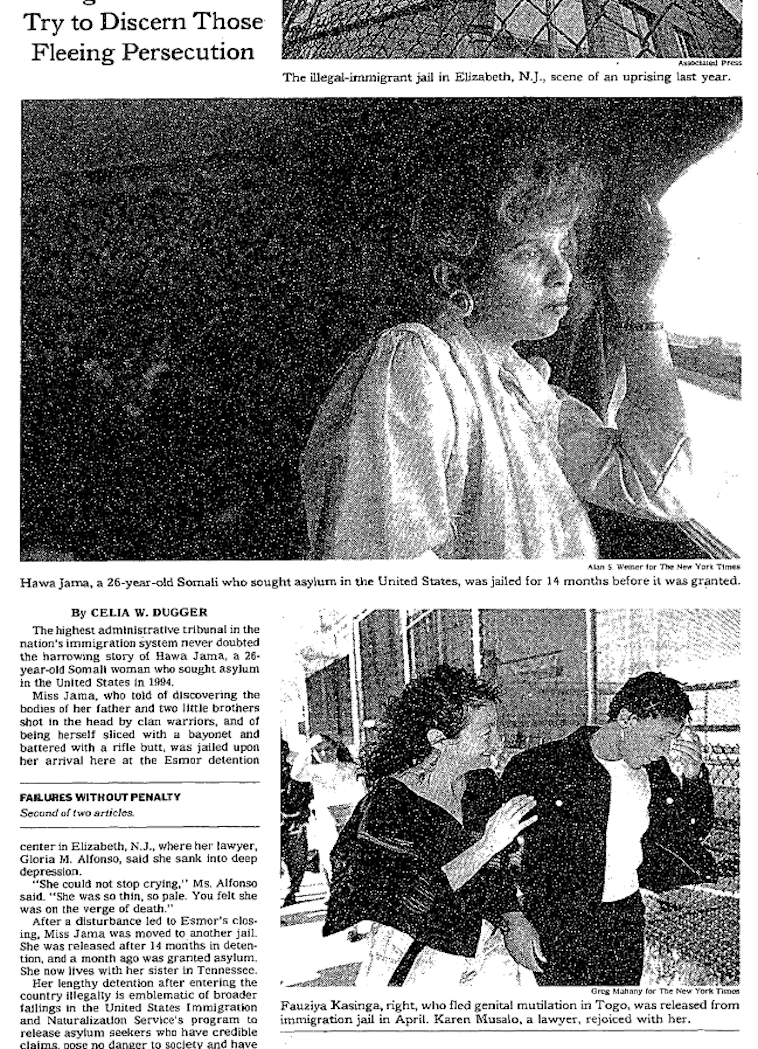 Hawa Jama experienced abuse based on her gender while at Esmor. Courtesy of: New York Times

These experiences affected these women’s mental health, Hawa Jama, a Somalian asylum seeker, stated during her deposition for the case Jama vs. INS, “Now I am outside, I am free . . . but still every night I sleep, every month, almost two months I have a bad dream because of the Esmor guards, the Esmor people. The Esmor place was abusing and the things that was happening in that place, and the things that was happening back home before that.” During the deposition, Jama’s lawyer had to tell her to calm down multiple times and even had to suggest taking a recess to give Hawa Jama a break from the questioning.[4]

However, female detainees were not without recourse while in detention. They were able to make friendships with other women in their dorms and, if fortunate, worked in the laundry where they could meet with women in other dorms.

Today, what used to be Esmor, the Elizabeth Detention Center, now only holds male detainees. Female detainees are held in facilities such as Essex County Correctional Facility and Delaney Hall located in Newark or Hudson County Correctional Facility in Kearny. Women detained in these detention facilities still remain vulnerable to abuse, including sexual abuse.