The Ins and Outs of the Jama Case Part I 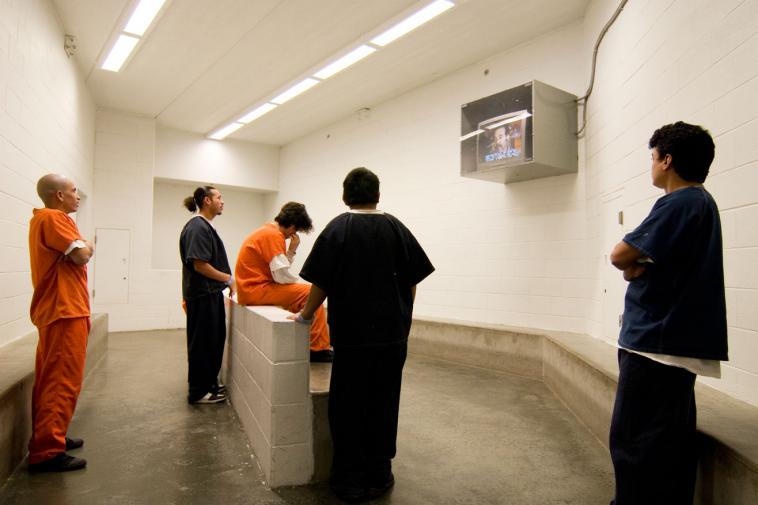 A holding cell for immigrant detainees much like the one at the Esmor facility. Courtesy of: The Seattle Globalist

The Jama case was filed in June 1997 on behalf of a group of undocumented aliens who were held at a private detention facility operated under the authority of the United States Immigration and Naturalization Service (“INS”) in Elizabeth, New Jersey.1 The Jama plaintiffs were all asylum seekers who had been detained by immigration officials upon their arrival in the United States. The lawsuit was brought against the INS and other defendants alleging inhumane conditions of confinement at the Esmor detention center in Elizabeth, New Jersey. The conditions of the detention center led to an uprising among detainees on June 18, 1995. The plaintiff detainees had been confined at Esmor when the rebellion occurred but had been transferred to other detention facilities throughout the country at the time this case was filed. Initially there were twenty plaintiffs, however, as a result of various settlements, deportations, and voluntary withdrawals prior to trial, by 2004 there were only nine remaining plaintiffs who were ready to take their case to a jury. Hawa Abdi Jama, a Somalian woman, was the lead plaintiff.

The Jama plaintiffs sued the defendants under the Alien Tort Claims Act of 1789 (“ATCA”), a 226-year-old law that allows U.S. federal courts to hear civil lawsuits by non-United States nationals for acts that violate international law or any treaty of the United States. The ATCA had very rarely been used from the time of its passage until the 1980s when it emerged as useful tool to sue foreign nationals residing in the U.S. for human rights violations they committed back in their native country.2 The Jama case is significant because it marked the first time a federal court ruled that detained foreign nationals could sue a private U.S. corporation for international human rights violations under the ATCA.

The Plaintiffs also sued under the Religious Freedom Restoration Act of 1993 (“RFRA”). The RFRA, a fairly new law at the time, provides that the “government shall not substantially burden a person’s exercise of religion” unless there is a “compelling governmental interest” to do so and the action taken must be the least restrictive means of accomplishing that governmental interest.3

The conditions under which the detainees at the Esmor detention denter were held were deplorable and are articulated in federal Judge Dickinson R. Debevoise’s 2004 ruling:4 The one-room dormitories were overcrowded and because there were not enough beds, detainees had to sleep on mattresses on dirty floors. The dormitory smelled like human waste because the detainees had to sleep and eat in the same vicinity of the toilets, which were inadequately cleaned and sanitized. They were sleep-deprived because of bright lights that were kept on 24 hours a day. The detainees were beaten, ridiculed, harassed, sexually assaulted, and denied proper medical care. Furthermore, the Muslim detainees were denied the right to freely practice their Islamic faith and made to starve or eat pork in violation of their dietary laws.

After an eight-week trial, the jury reached a verdict on November 13, 2007 finding for plaintiff Jama on the Religious Freedom Restoration Act (RFRA) claim and on the claim of negligent hiring, training, and supervision of Esmor facility staff. However, the jury determined that plaintiffs had not made a sufficient case to prevail on the Alien Tort Claims Act. Hawa Abdi Jama was awarded $100,001 in compensatory damages for violation of her rights under the RFRA and for the negligent staffing of the detention center. The case represented the first time a non-citizen plaintiff prevailed in an RFRA case. Although plaintiffs were unsuccessful in their ATCA claim, the Jama case is significant in that it was the first time that a court said non-U.S. citizens could sue a private U.S. corporation for violations of human rights in a detention facility operated in the United States.

3. Religious Freedom Restoration Act, Public Law 103-141, Nov. 16, 1993, sec. 3, codified at 42 U.S.C. §2000bb-1. The RFRA was passed by Congress in responses to a recent Supreme Court decision in Employment Division v. Smith, 494 U.S. 872 (1990), that upheld a lower court’s ruling denying unemployment benefits to a group of Native American workers who were fired for using peyote during religious services in violation of their employer’s drug use policy. See the full text of the law here: www.justice.gov/sites/default/files/jmd/legacy/2014/07/24/act-pl103-141.pdf.