The Ins and Outs of the Jama Case Part II 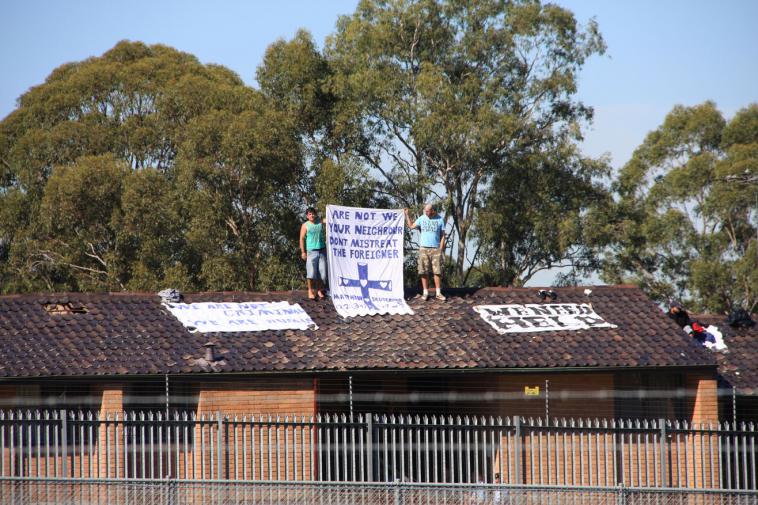 Asylum seekers have used religion to protest their confinement. Courtesy of: Adam J.W.C.

The Jama plaintiffs were foreign nationals who had come to the United States seeking asylum from their country of origin: Hawa Abdi Jama (Somalia), Anantharajah Jeyakumar (Sri Lanka), Abu Bakar (Sierra Leone), Cecilia Kou Jeffrey (Liberia), Abraham Kenneth [Kenneh] (Liberia), Dennis Raji (Nigeria), Agatha Serwaa (Ghana), Shamimu Nanteza (Uganda), and Sarah Tetteh Yower (Ghana). Since the passage of the Illegal Immigration Reform and Immigrant Responsibility Act of 1996, whenever a foreign national arrives in the United States without proper visa documentation and explains to U.S. Border Patrol (“USBP”) personnel that they are fleeing from their country and seeking asylum in the U.S., they are apprehended and transferred to Immigration and Customs Enforcement (“ICE”) for detention pending a determination on their “credible fear” application for refugee status. Because immigration detention is considered a civil administrative process, many asylum seekers are subject to indefinite periods of confinement in penal-like facilities, with few of the legal protections afforded U.S. citizens under the criminal justice system. Individuals seeking asylum in the U.S. often face insurmountable challenges in navigating an immigration system founded on a history of exclusionary and racialized immigration laws and policies that have become increasingly restrictive for asylum seekers in the last two decades. Click here for a U.S. immigration history timeline: https://www.hstry.co/timelines/a-history-of-immigration-in-the-usa

Lead plaintiff Hawa Jama, a Somalian Muslim, fled her homeland after being assaulted and then discovering the bodies of her father and two younger brothers, who had been shot in the head by clan warriors. She arrived at John F. Kennedy airport on a hot August night and asked the U.S. Border Patrol to grant her asylum. After a grueling 13 hours at the airport answering questions, she was taken into ICE custody and transferred to the Esmor detention center where she spent the next ten months being subjected to verbal and physical abuse until being transferred to another facility in Pennsylvania following an uprising among the detainees at Esmor. Among the many abuses Jama endured was the inability to freely practice her religion.

Although it is a violation of Islamic law for a woman to show her naked body to any man other than her husband, Esmor guards routinely watched her shower and refused to give her privacy. Also in violation of her religious tenets, guards allowed dogs to touch her Q’uran and, in fact, she was forced to use a copy that had feces smeared on it. When she kneeled to pray guards would snatch her up from the floor and toss her on her mattress in order to obstruct her prayers. She was never able to see an iman, but priests were allowed. Jama was served pork despite the fact that officials knew it was a violation of the Islamic faith to consume pork.

Standards for Treatment of Muslim Detainees

The jury found in favor of Hawa Jama on the Religious Freedom Restoration Act claim, agreeing that Jama’s right to freely practice her religion had been violated. The Jama decision is significant if it creates a uniform standard for religious accommodation for Muslim detainees in private facilities. If the plaintiffs had successfully sued the federal government, we would have case law determining detainee rights but the Jama case was won against a private corporation. Therefore, important determinations must be made. What guidelines exist to set a standard of treatment for religious expression and are those guideline monitored and enforced?1 More specifically, since Jama, have Muslim detainees in private detention facilities in New Jersey been allowed to read the Q’uran at will? Are they able to kneel and pray several times a day in in a manner consistent with Islamic law? Are their dietary restrictions respected? Are males and females appropriately segregated according to Islamic custom?

In a September 2015 U.S. Commission on Civil Rights Statutory Enforcement Report on Immigrant Detention, the commission reports that federal contract facilities are still interfering with Muslim detainees’ religious rights.2 In light of events in Paris, France, San Bernardino, California, and with the Syrian refugee crisis, we can expect to see more Muslim detainees in ICE-contracted detention facilities. The United States must treat Muslim detainees with dignity and humanity if it purports to hold itself to a high moral standard. If asylum seekers must be detained, at least let them be held in civil environments, free to practice their faith unfettered. We must dispense with rhetoric and demonstrate that our moral compass is higher and that the U.S. treats everyone with dignity.

With Liberty and Justice for All: the state of civil rights at immigration detention facilities. A Briefing Before the United States Commission on Civil Rights Held in Washington, D.C., September 2015, 117-123. Accessible at http://www.usccr.gov/pubs/Statutory_Enforcement_Report2015.pdf