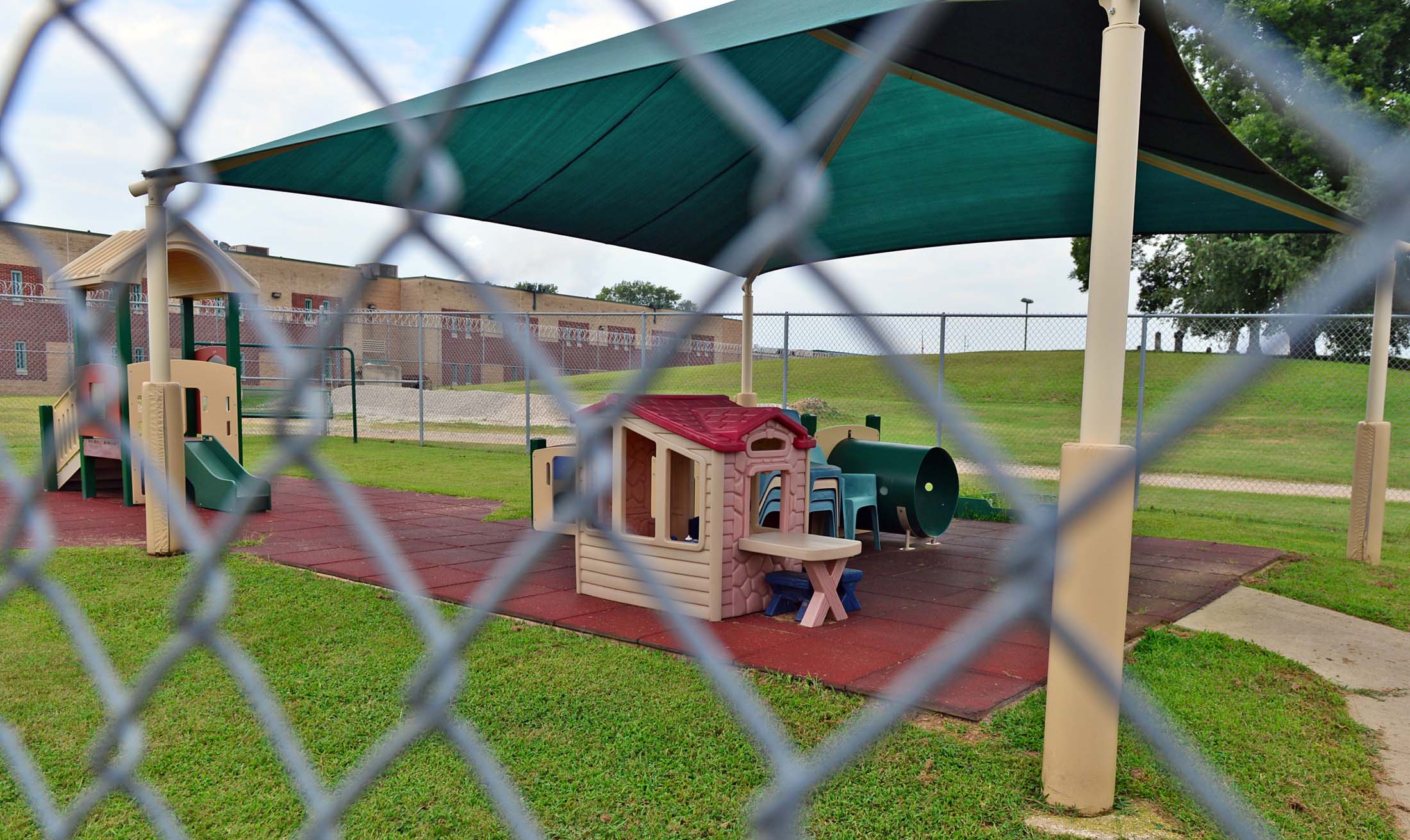 Lakin Correctional Center has a fenced-in area for toddlers, who are part of the Keeping Infant Development Successful (KIDS) Program. Photo by Tom Hindman for The Charleston Gazette-Mail.

Since the expansion of Lakin Correctional Facility in 2006, 119 women have arrived pregnant. Of those women, 104 have given birth while serving time at the facility.

In 2005, Lori Nohe, the warden at Lakin at the time, decided there should be a way for new mothers at Lakin to bond with their children despite their incarceration.

“When we first pitched the idea for this unit, the public reaction was primarily negative,” said Nohe. “However, we believed that the babies born at Lakin still deserve to have a relationship with their mothers.”

According to Nohe, the developmental bond between incarcerated mothers and their infant children reduces the recidivism rate of the mother and allows for an attachment to be formed between them.

A report by the London Journal of Primary Care states that in the first 18 months, mothers and babies with loving and affectionate relationships have more success with attachment. This attachment has been shown to lead to children growing into more loving, independent and resilient adults.

Until 2015 when women at Lakin went into labor they were transported to Pleasant Valley Hospital. Denise Queen, the director of women’s services and pediatrics, oversaw a lot of those births.

Lakin launched its Keeping Infant Development Successful (KIDS) Program in 2006. The program’s facilities hold up to five women who can live with their children inside the prison for up to 18 months. There is more room allotted for babies, just in case a mother delivers twins.

Ten years after the facility opened, 30 mothers have given birth to 31 babies while enrolled in the program. Only one woman who participated in the program has returned to prison.

According to a report by the Prison Policy Initiative, nationally, 80% of women in jail are mothers, and most are primary caregivers. In state prisons, more than 60% of women have children under the age of 18.

Nationwide, 4% of women in state prisons and 3% of those in federal prisons are pregnant at sentencing.

Because of a contract renegotiation with the hospital, since 2015, women at Lakin, in Mason County, go to Cabell Huntington Hospital in Huntington, West Virginia to deliver their babies, where they give birth unshackled, and are allowed family visitation. The hospital is an hour away from Lakin, in another county.

Though Queen no longer oversees the deliveries of babies born at Lakin, she remembers how difficult it was for mothers who had to go back to prison and could not stay with their babies.

Some women do not see their children for months and even years after delivery.

“It’s heart-wrenching when the mother is going back to the prison and the baby is at the hospital,” said Queen.

Those who are accepted into the KIDS Program return to Lakin with their children where they live 24 hours a day, caring for their child, while finishing their sentences.

Prior to their acceptance, women must be assessed by Child Protective Services (CPS) and cleared of any history of abuse and/or neglect.

Early Head Start provides collaborative services for infants and mothers, beginning when the mothers are pregnant. They work in collaboration with the KIDS Program at Lakin to educate mothers about good parenting skills and how children should be nurtured.

While enrolled in the program, mothers must attend parental training and parent/child activities.

At the time of its development in 2005, there were only five other states with state and federal facilities offering programs similar to KIDS. Now, there are 10 states offering housing and care programs to inmate mothers.

According to J.D. Sallaz, the superintendent at Lakin Correctional Facility, the KIDS Program has had constant enrollment in 2019. In November, two women and their babies were living in the unit.

To be eligible for the program, mothers must be pregnant prior to arriving at Lakin and deliver their children while incarcerated there. They must also be physically and mentally capable of caring for a child and be eligible for parole or discharge by the time the child reaches 18 months of age.

Nohe, the former warden, said, “It is Lakin’s belief that the opportunity to live in a safe, secure and nurturing atmosphere while learning parenting skills has not only created a new beginning for the mothers, but has also acted as a springboard toward greater opportunities and development for the children.”

The KIDS Program is funded solely through grants provided by Early Head Start and small monetary donations. Clothes, toys, diapers and other supplies are all donated or purchased with donated funds.

Costs for the infants’ food are provided by Women Infant and Children services (WIC), and all of the babies’ medical costs are covered through Medicaid, making the current cost per baby approximately $20 per day.