This is a bed sheet decorated by an immigrant detainee. It is dedicated to the staff and interns at First Friends of NJ and NY whose mission statement is to uphold the inherent dignity and humanity of detained immigrants and asylum seekers. First Friends provides hope through volunteer visitation, resettlement assistance and advocacy.

Because they are not allowed art supplies, some detainees color sections of their bed sheets using the powder from the drink mixes they are given, usually Kool-Aid. This art is done in secret because the corrections officers will confiscate it if discovered. 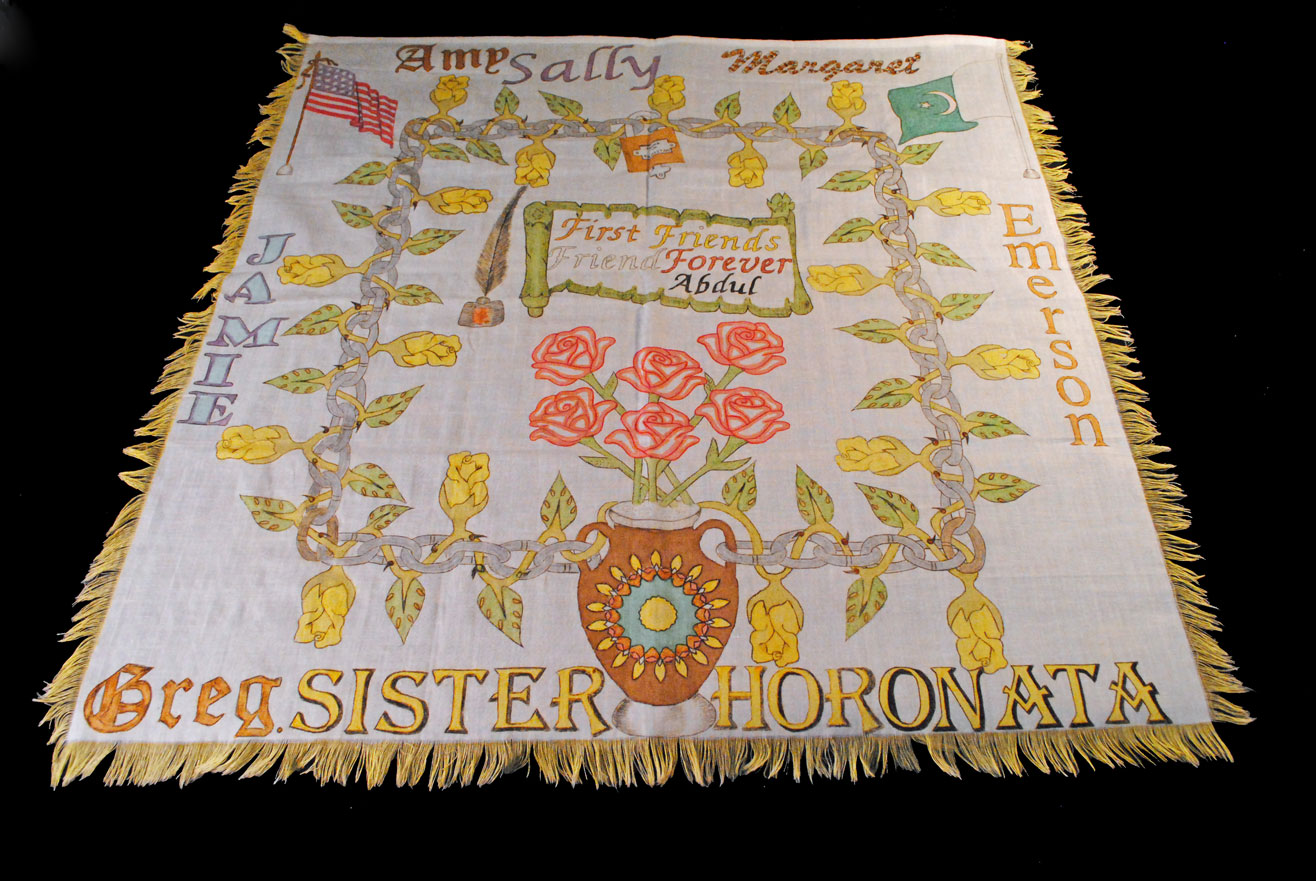 These are just a few of the many bracelets that decorate the wall at First Friends. Although they appear to be made of woven fabric, a detainee named Sapa crafted them out of plastic bags. The orange bracelet is a gift for Rosa Santana, the Visitation Coordinator at First Friends. 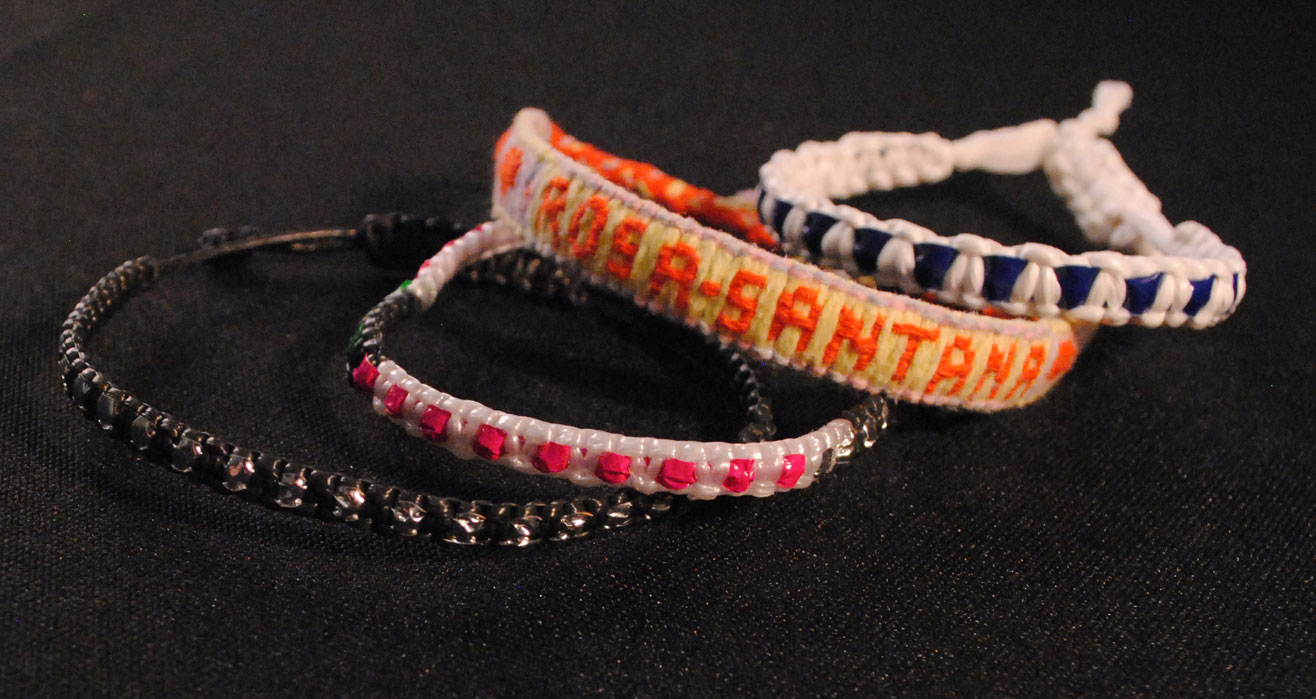 This is the jewelry artist himself, Sapa, rendered in a drawing done by his friend and fellow detainee. He noticed Sapa sitting in this position and was compelled to capture his sadness. 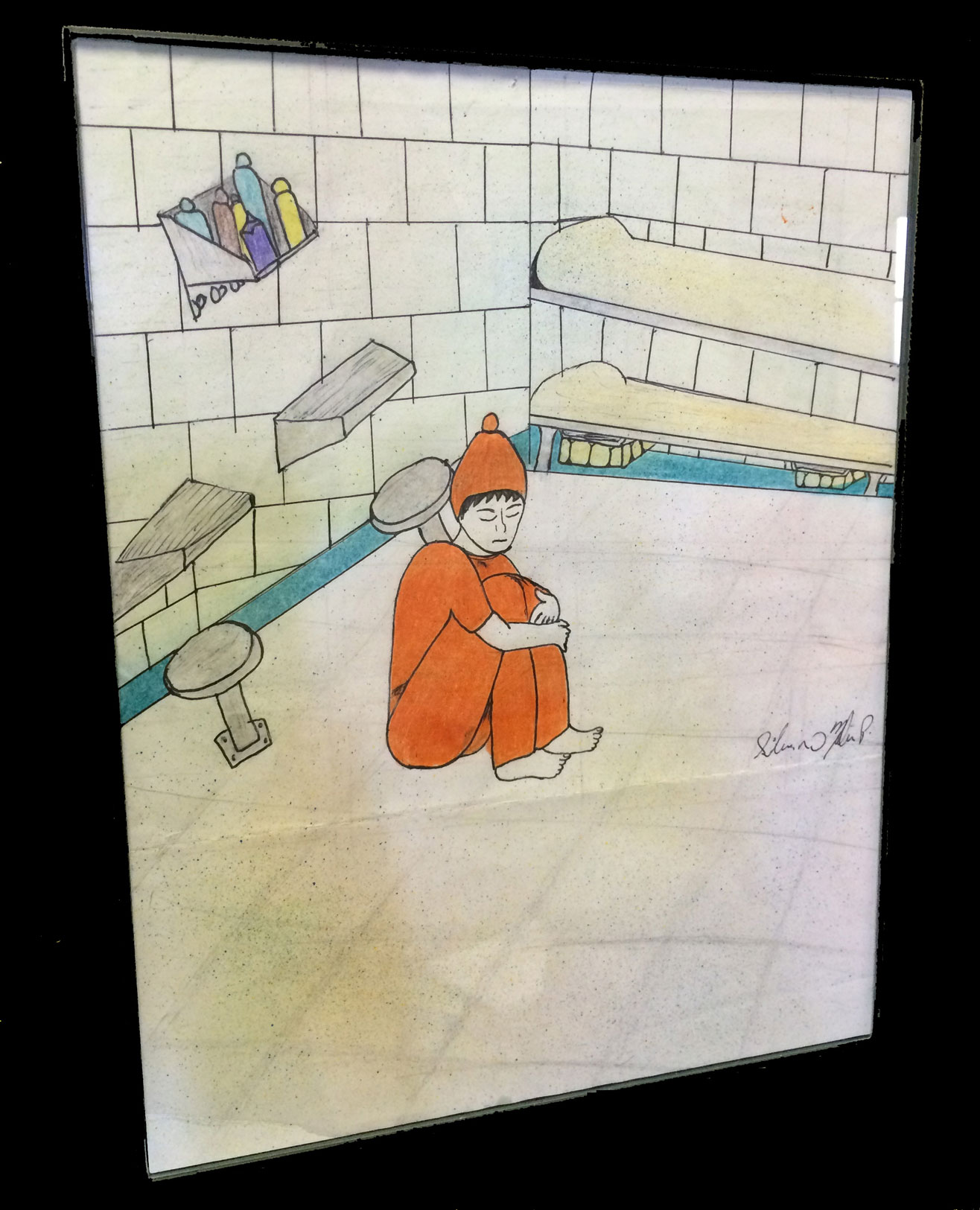 Flower drawn by a young boy held in Dilley, Texas at The South Texas Family Residential Center, an Orwellian name for the largest immigrant detention center in the U.S. An estimated thirteen hundred women and children are currently held there. Most are asylum seekers, from Honduras, El Salvador, and Guatemala, fleeing extreme domestic and gang violence. This past summer at the South Texas facility about 250 detained children were given adult doses of the Hepatitis A vaccine by mistake. “Dilley is unlike anything I’ve ever seen,” Ilana Greenstein, a Boston-based immigration attorney who volunteers at Dilley told [The New Yorker] “I’ve never seen children in jail.” 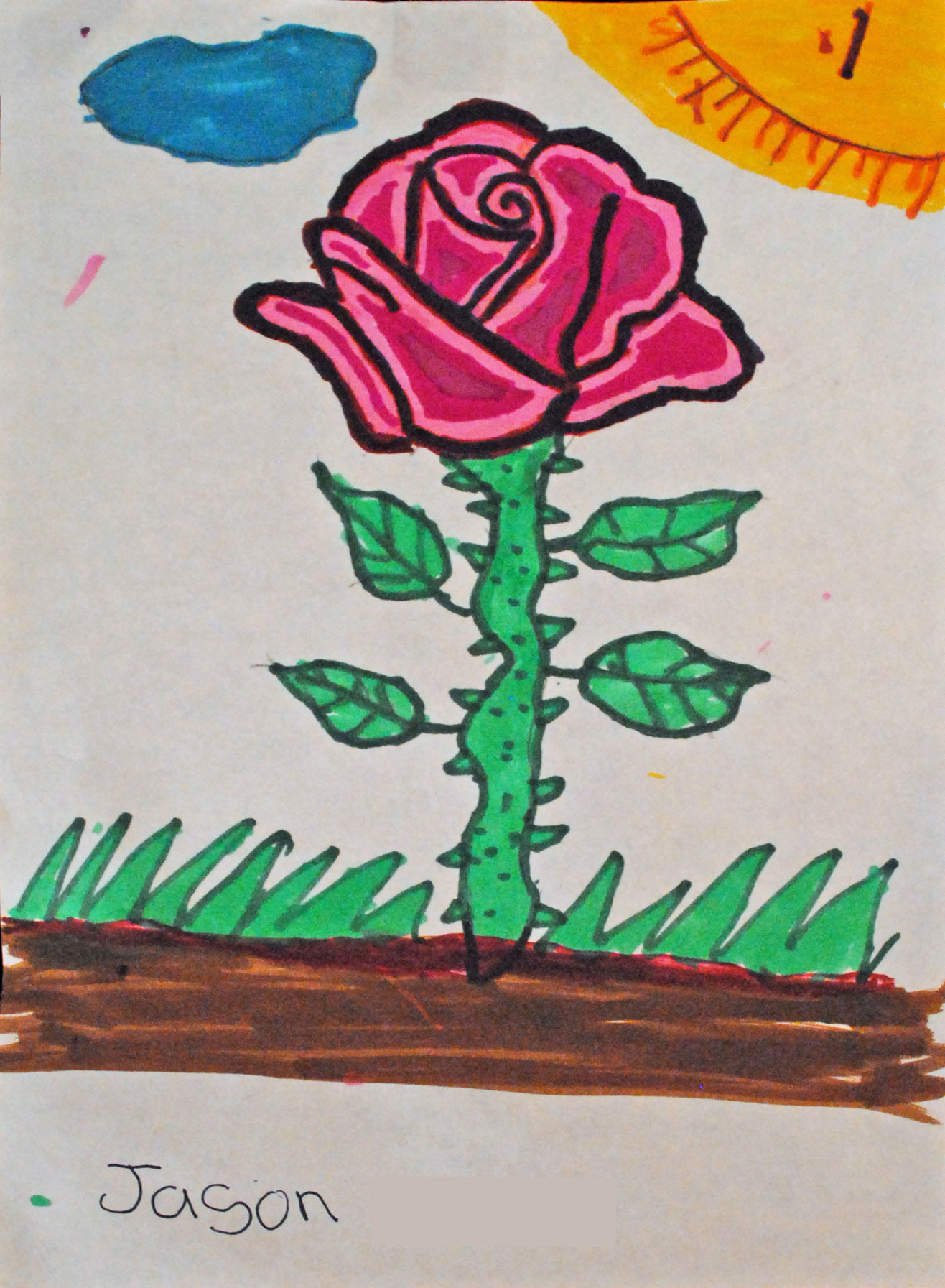 First Friends’ Program Director, Sally Pillay, gave a presentation at a California detention center as part of a project to capture more women’s stories. A female artist held at this facility gave this drawing to her. 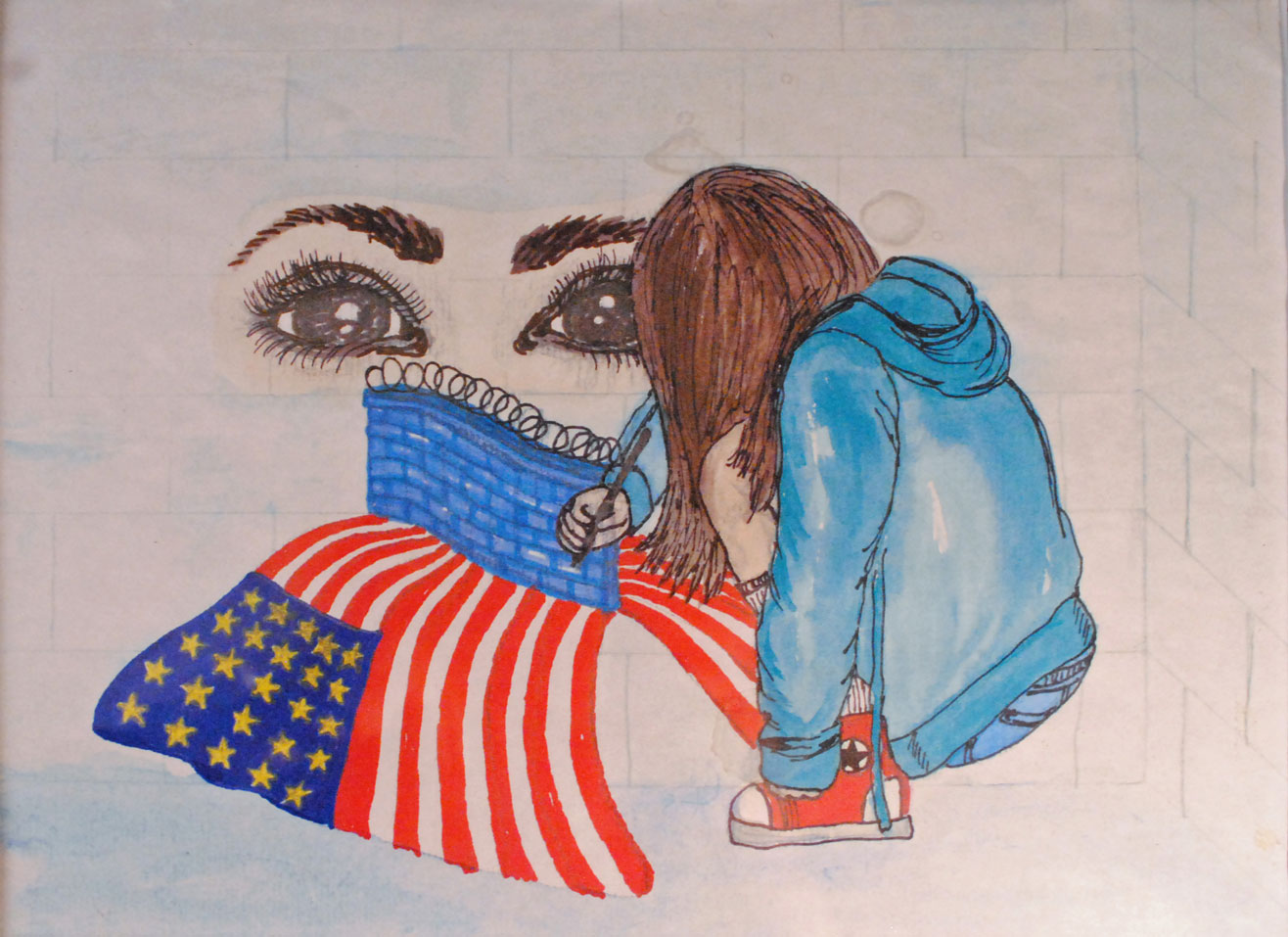 Drawing of Our Lady of Guadalupe, also called the Virgin of Guadalupe. She is one of the most popular Mexican religious devotions.

Not being able to practice their religion is a major issue for detainees. In 1995, there was an uprising at the Elizabeth Detention Center, then known as Esmor. One of the issues leading to the revolt was the facility’s infringement on religious rights.

“And whenever those searches happen, they throw away everything. Even my Koran, I was keeping on my bed, something like a bible I have to read. They throwing away all the time. I need it for my religion.” –one of the deposition statements from Hawa Jama, plaintiff in the court case against Esmor. 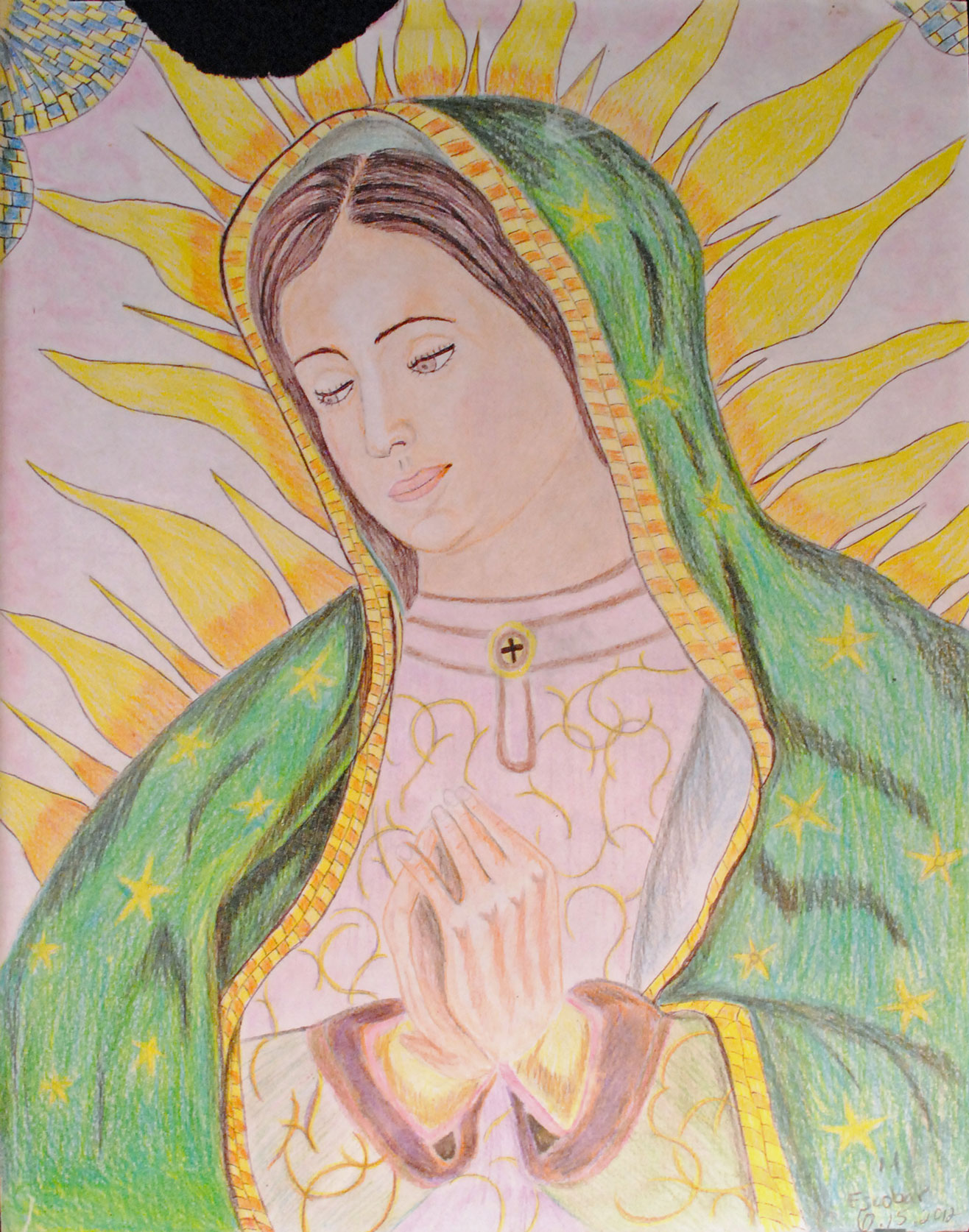 There used to be an art program for women held in Delaney Hall detention center in Newark, NJ.
One of the women made this flowerpot out of colored paper, napkins, and tissues. She gave it to a fellow detainee when she was released from detention as a goodbye present.
The art program no longer exists. 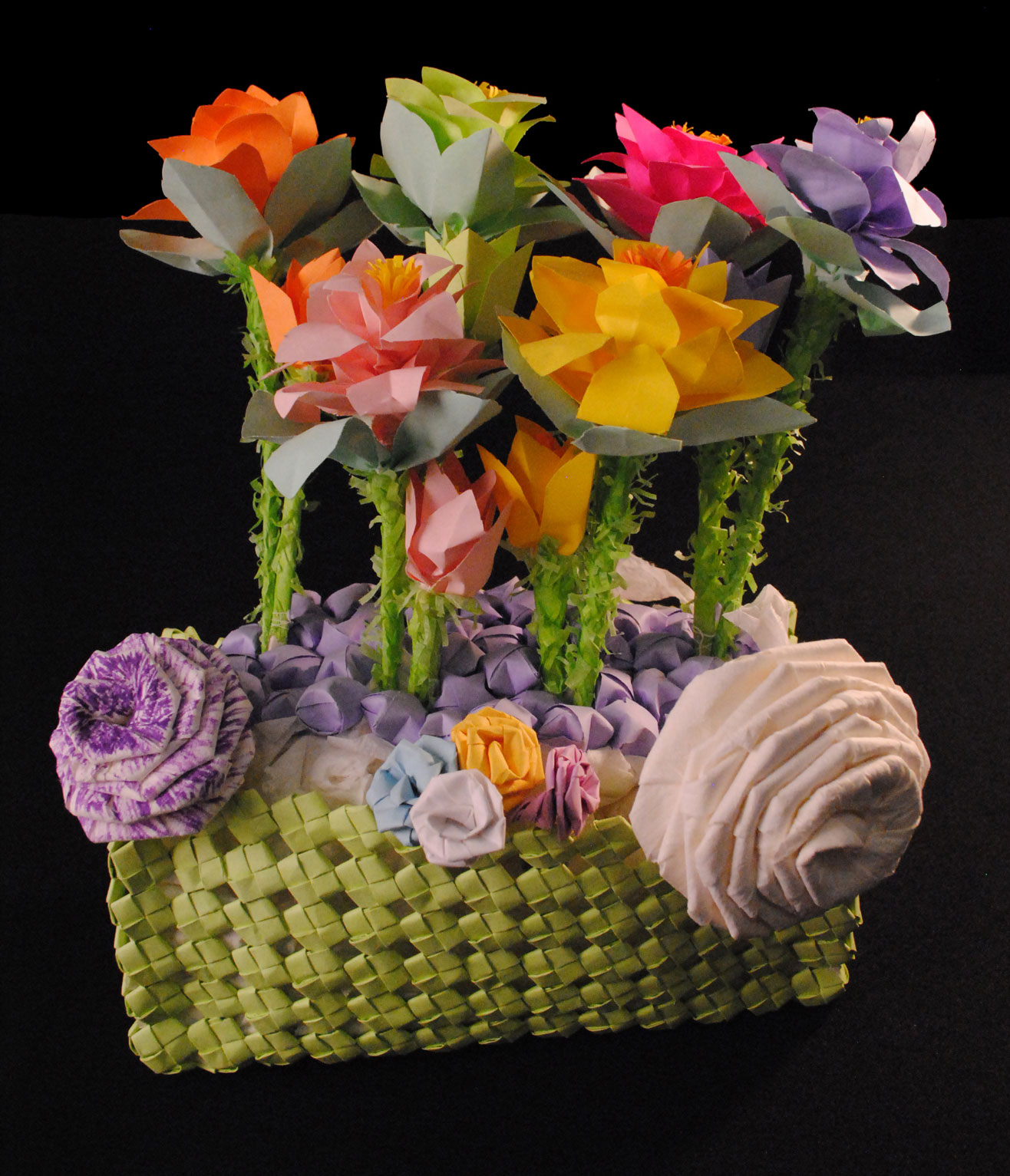 A woman detained at the Hudson County Correctional Facility in Kearny, NJ made this picture frame out of Ramen noodle packages bought at the commissary.

A job in detention earns $1 per day. A detainee must work a full day before he or she can afford to buy one package of Ramen noodles from the commissary, where they are marked up to a dollar per package. To compare, at Walmart stores, Ramen currently costs $2.27 per 12 pack—about 19 cents each. Considering the amount of Ramen packages used, this picture frame may have cost this detainee about $47 dollars or 47 days of labor to make. 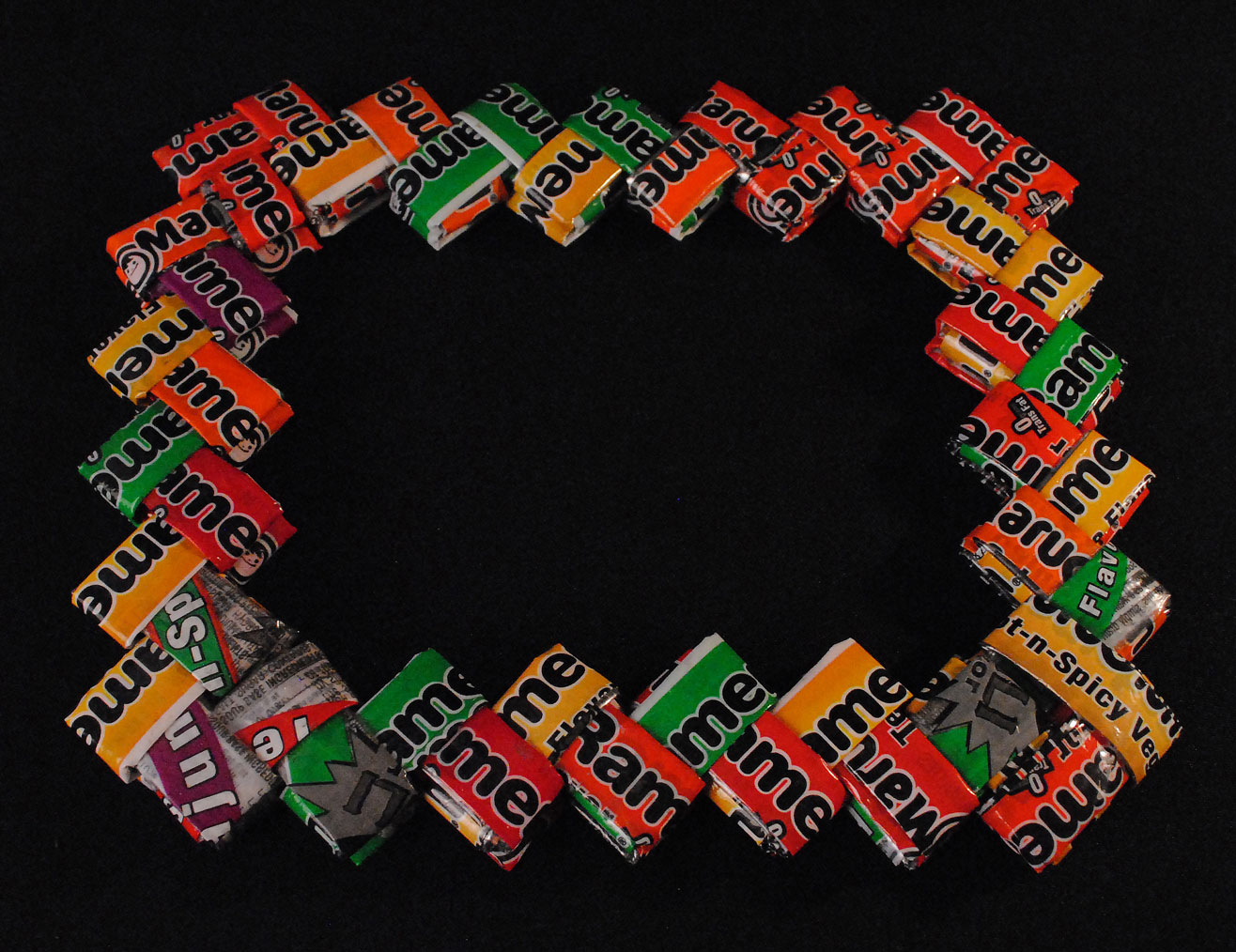 A woman held at Delaney Hall in Newark, NJ wove paper towels together to create a canvas.
When she was released on asylum, she brought it to the First Friends office to give as a token of appreciation. 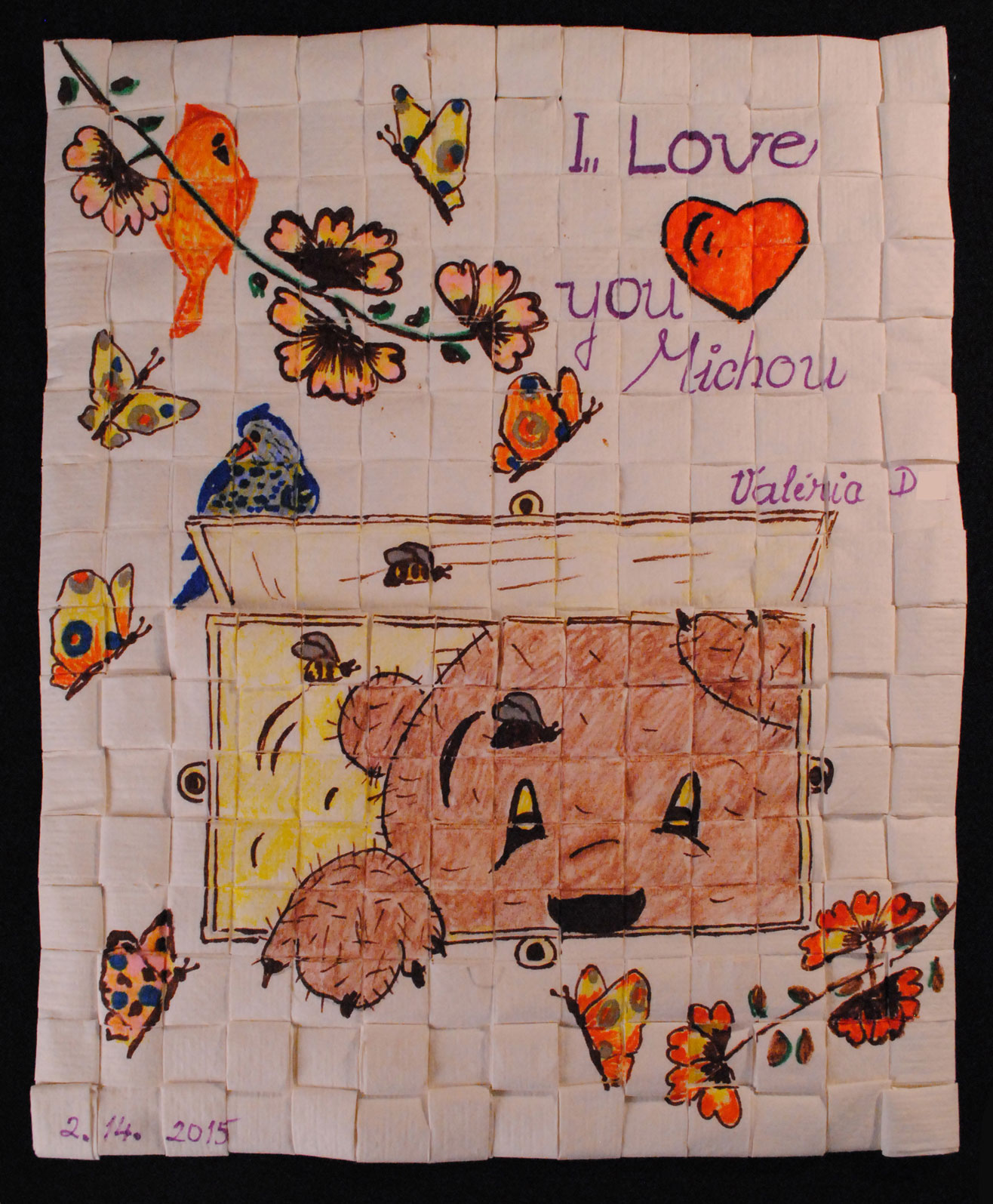 Purse with over the shoulder strap made from magazines woven together by a woman at Delaney Hall.

“Make no mistake about it: despite benign-sounding words like “community” and “education” and “center” and “facility,” Delaney Hall is essentially a prison. Detainees wear jail-like uniforms. The drab hallways are patrolled by guards (though I believe they were called “counselors”). The so-called law library is a closet-sized room consisting of a computer terminal with an unusable CD-ROMversion of Lexis, a handful of irrelevant law books, and a bulletin board with tattered lists of legal resources mostly out-of-date, inaccurate, or both.” writes Careen Shannon of Counsel at Fragomen LLP on Human Rights First in November, 2014. 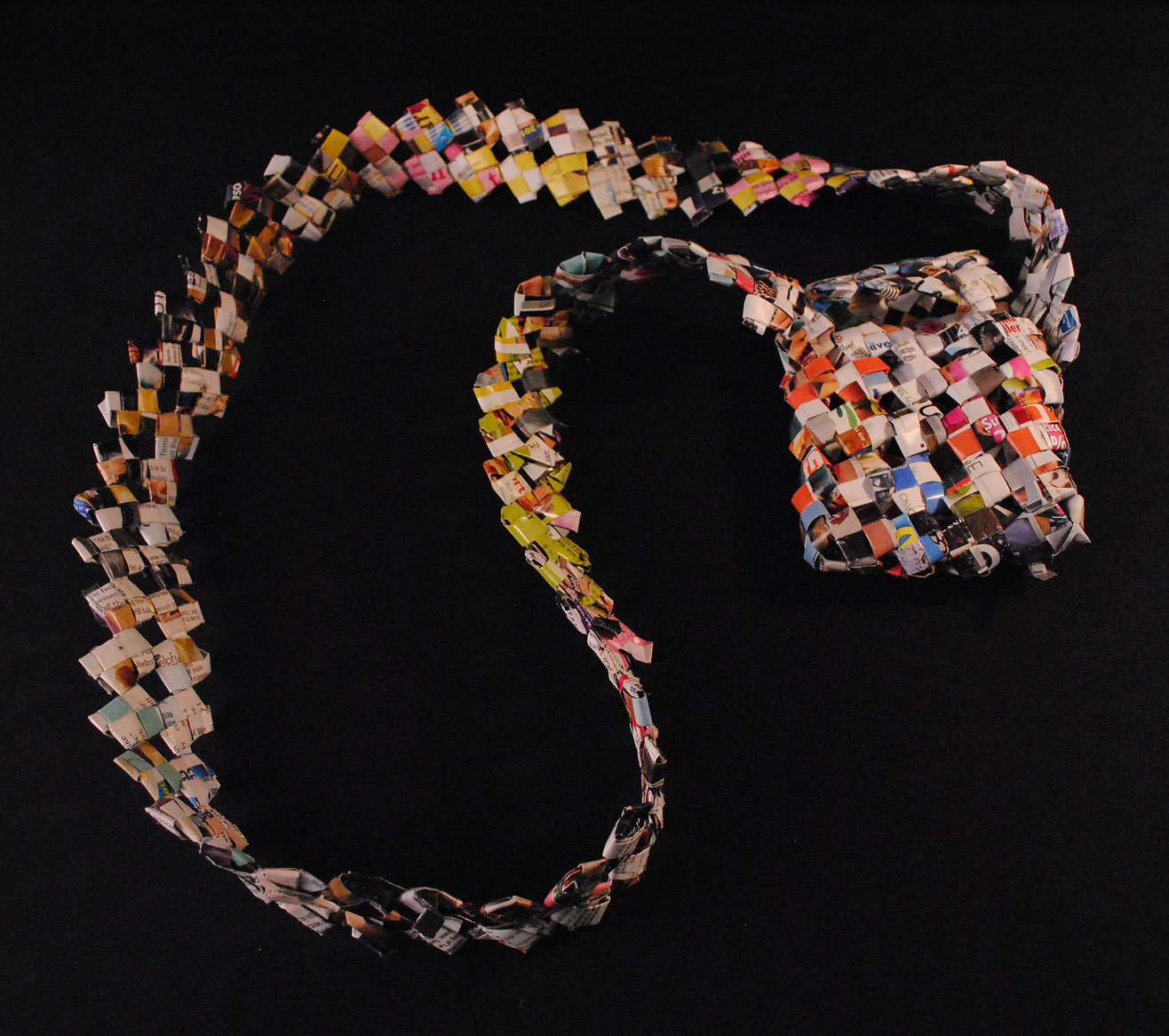 This drawing was made from an inmate who was on death row in Texas. It is the only art piece not made by a detainee. He was a U.S. citizen with Mexican ancestry. Imprisoned for murder, he became a gang member at the age of eighteen.
He created this drawing for First Friends to symbolize the situation of undocumented immigrants held in detention.
In it, the Statue of Liberty is behind bars. The scales of justice are broken and a dove carries scissors to cut the blindfold from ICE’s eyes.
Early in 2014, the artist began an appeal of his sentence, however, in October of that year, he was executed. 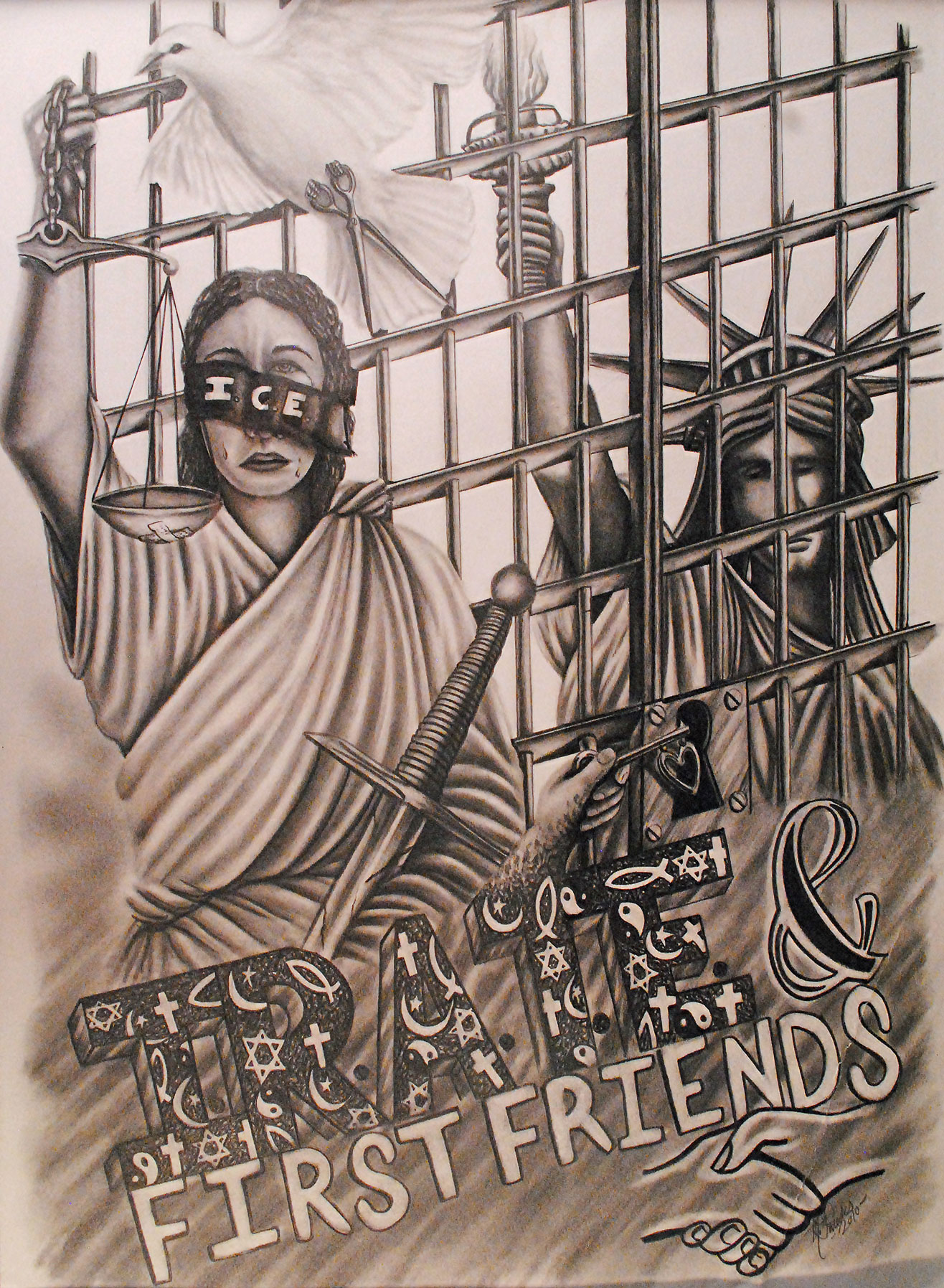 Wallet made out of Cheetos wrappers by a man held in Delaney Hall, Newark. He was released from detention in the middle of the night, a common practice of ICE. First Friends provided him with overnight hospitality by a host family. Then transported him safely to his family in another state. Like countless other detainees, during his time in detention, he had been bounced around to different facilities in various states far from family. 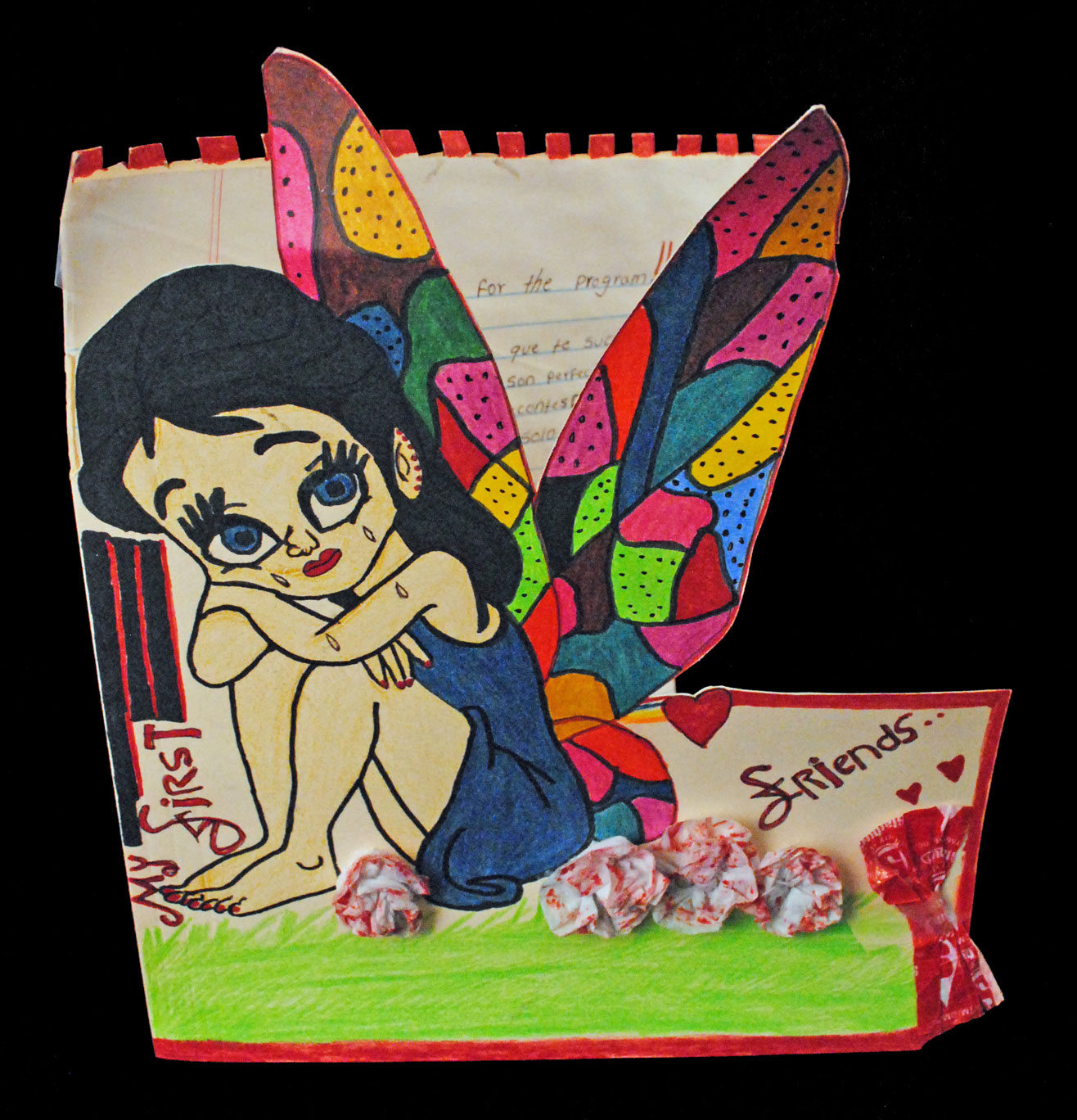 Translated from Spanish, her card is a beautiful message of brave optimism.

"There's always a reason as to why things happen here, Joyful or Painful, they're meant specifically for you and there's nothing you can do to dispute or deny them. For good or ill, it's all about learning.

There's a reason for those things that are hardest to accept, the butterfly was once a caterpillar before she could fly and the fire that burns you today will set you free tomorrow. It will be the brightest gem in your skies.

There's a reason for everything and if you look back at the pain in the past you'll be able to see that in the end this turned into beautiful flowers and those that are most delicate and bring you the most joy are the ones that where watered by your tears.

When you winter has been cruel or if being at peace is not common, or if your past has destroyed you, with both of these there's a reason for everything that happened.
-The story of the sad imprisoned butterfly, Reina R—” 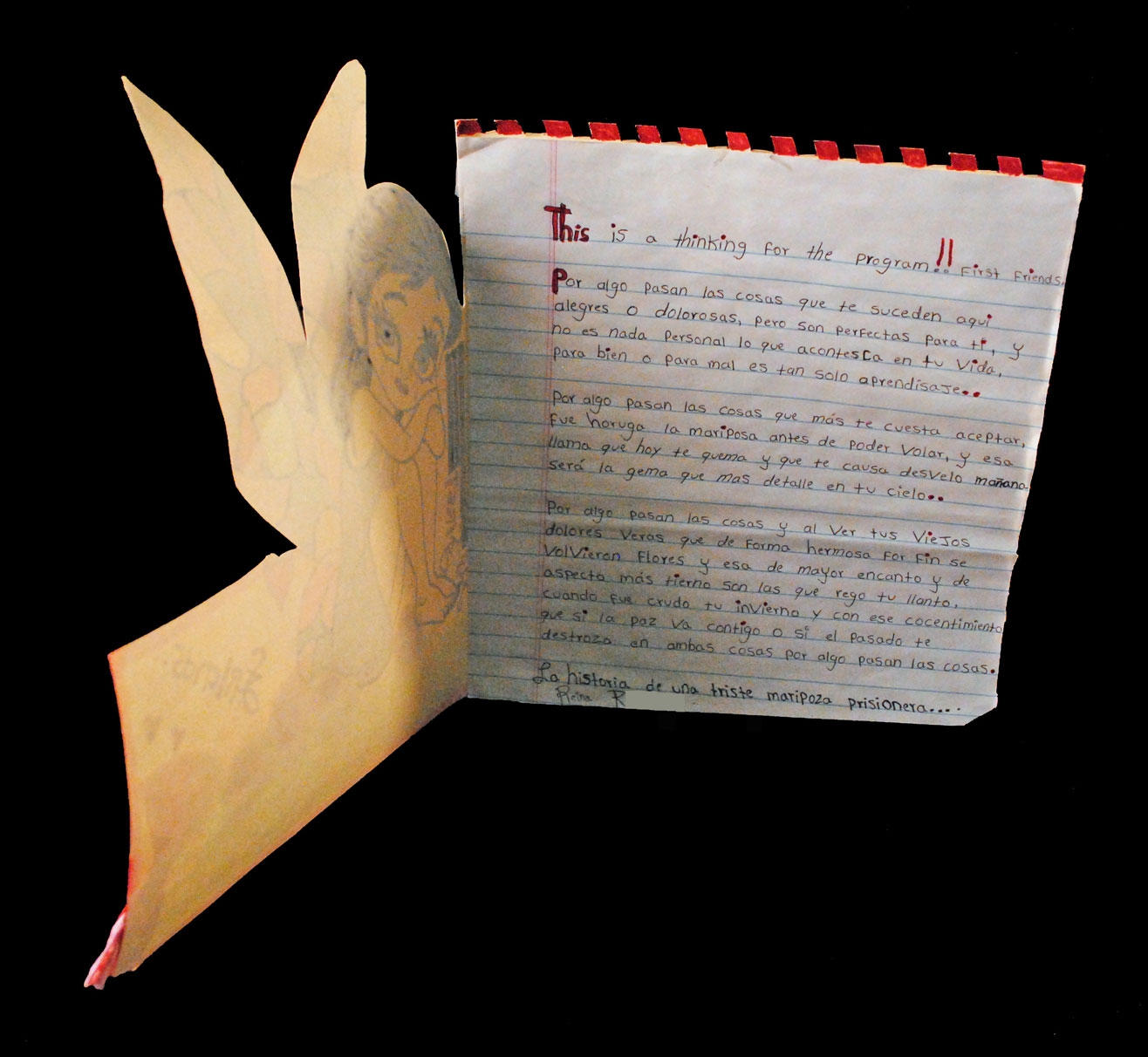 The center drawing has sections of U.S. money cut and pasted to represent the waste of taxpayer money. According to the National Immigration Forum’s 2013 report, it costs U.S. taxpayers $159 per day to house each detainee. The artist was an asylum seeker. He was deported back to India where his life was in danger due to religious persecution. 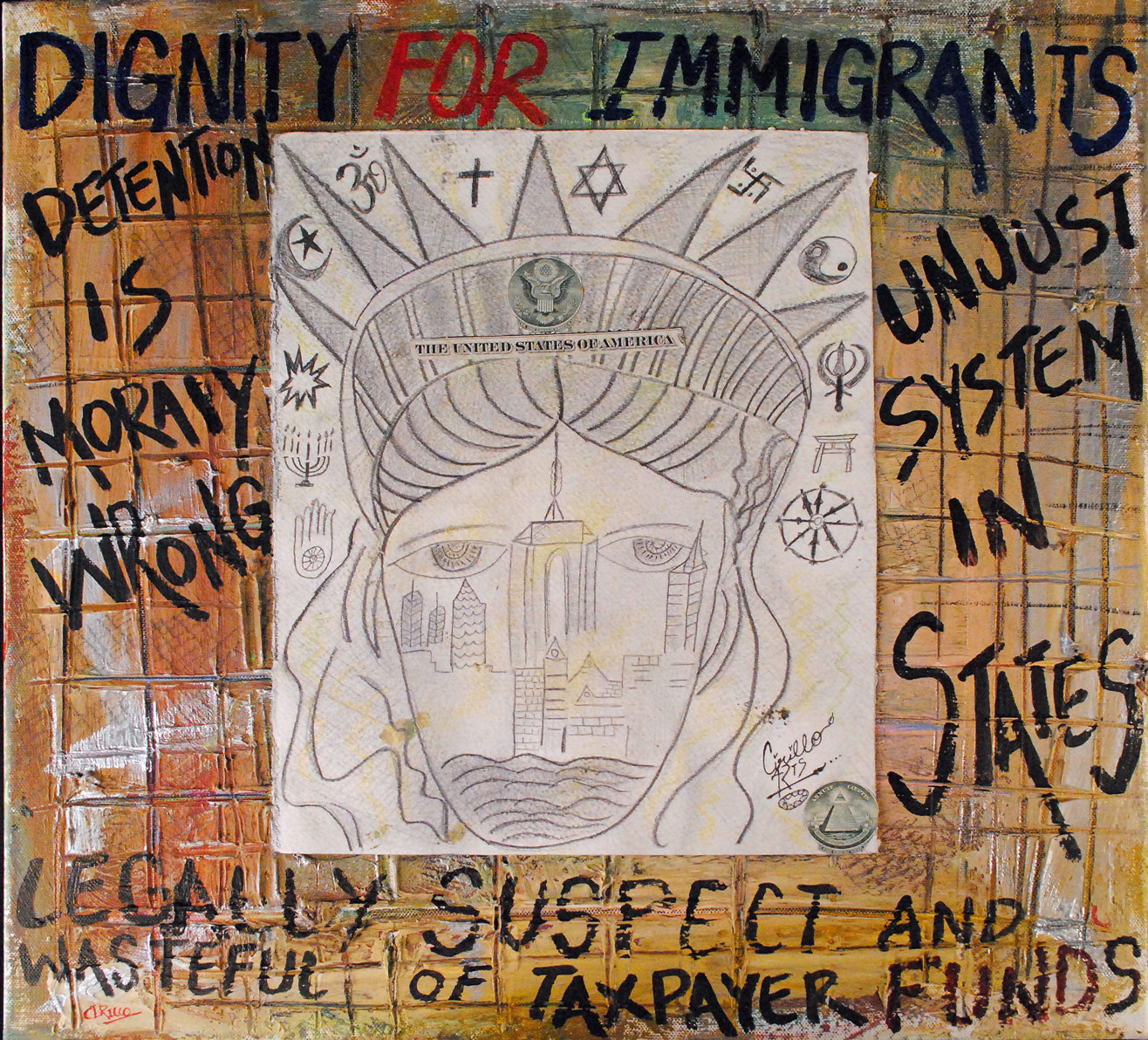