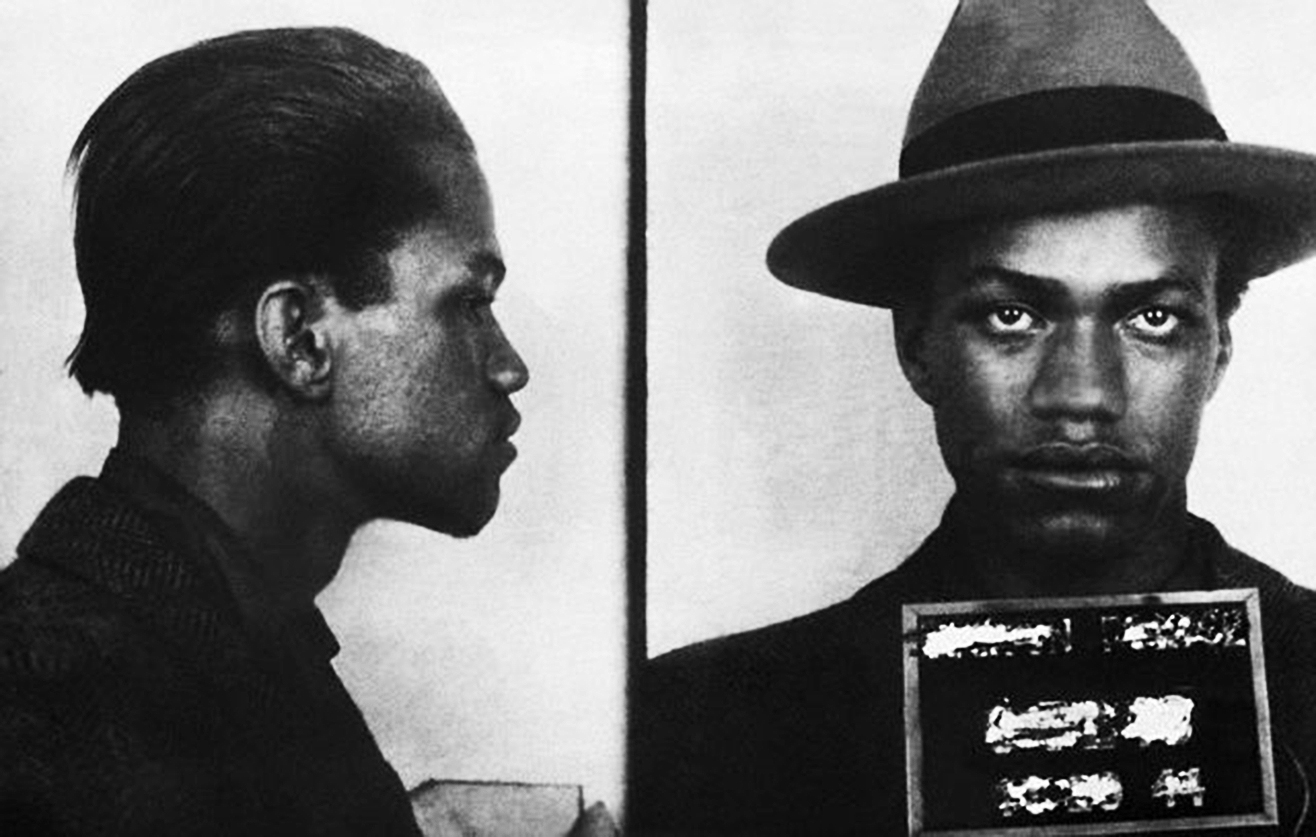 "My baptism into public speaking"

Born Malcolm Little on May 19, 1925, his childhood was marked by the death of his father at age six. The family of eight children suffered financially and emotionally. Malcolm relocated from Michigan to live with his half sister Ella Collins in Boston when he was a teenager. Malcolm became involved in the street life and criminal activities of Roxbury and Harlem while working as a train server on the Yankee Clipper route from Boston to New York.

In February 1946, at age 21, he was convicted of robbery and sentenced to 8-10 years in the Charlestown State Prison. Malcolm described himself as “physically miserable and evil-tempered as a snake.”2 A fellow inmate encouraged him to take advantage of the courses and library materials offered by the prison. Though Malcolm had only completed his education through the eighth grade, he began studying the dictionary, reading, and participating in courses in English and Latin.

Malcolm’s efforts to reform and educate himself at Charlestown Prison motivated his sister Ella to begin a letter writing campaign to get him transferred to the Norfolk Prison Colony which had a reputation for inmate educational programs with ties to area colleges like Harvard, Emerson, and Boston University. Malcolm himself contributed to this campaign, expressing a desire to learn more to expand his skill set. They were successful, and he was transferred March 31, 1948. In his autobiography, Malcolm described the Colony as "comparatively, a heaven, in many respects."

“Norfolk Prison Colony represented the most enlightened form of prison that I have ever heard of. In place of the atmosphere of malicious gossip, perversion, grafting, hateful guards, there was more relative ‘culture,’ as ‘culture’ is interpreted in prisons. A high percentage of the Norfolk Prison Colony inmates went in for ‘intellectual’ things, group discussions, debates, and such.”3

At Norfolk he had his own cell and more physical freedom. He joined the weekly debate team. Once he started, he was hooked: “debating, speaking to a crowd, was as exhilarating to me as the discovery of knowledge through reading had been.”4 His rebuttal to a debate on “The Abolishment of Capital Punishment,” was featured in the Norfolk newspaper, The Colony.5

Malcolm continued to devote his time to studying in the prison’s library. Even in his bunker, he pored over dictionaries, copying and reviewing words until he could read and write with ease. This led him to feel distant, even freed, from his life before prison, stating, “It is as though someone else I knew of had lived by hustling and crime.”6 While in prison he also became a member of the Nation of Islam, a growing black Muslim movement based in Chicago led by EIijah Muhammad. His independent views clashed with the prison administration and he was sent back to the Charlestown Prison on March 23, 1950 after refusing to cooperate with prison inoculation policies.

After his release in 1952, Malcolm secured employment as a Minister of the Nation of Islam. He utilized his communication skills to start a newspaper for the religious order and was soon involved in national debates. He challenged the social order of the day with speeches that possessed both a learned knowledge of history and first-hand knowledge of systemic racism. He spoke at a wide range of venues including Muslim temples, churches, public rallies, and Harvard, Yale, Columbia, and many other universities. Malcolm X was uncompromising in his complete dedication to the empowerment of black people. His speeches drew upon experiences from his own life as well as from African American history, folklore, and culture. Malcolm X rose to the status of one of the greatest orators in American history before his assassination in 1965.

Felber, Garrett. “Justice Breyer and Malcolm X: A Concurring Opinion from the Past.” Accessed 12 November 2015. https://www.themarshallproject.org/2015/07/02/justice-breyer-and-malcolm...

Lomax, Louis. When the Word is Given; A Report on Elijah Muhammad, Malcolm X and the Black Muslim World. Cleveland: The World Publishing Company. 1963.