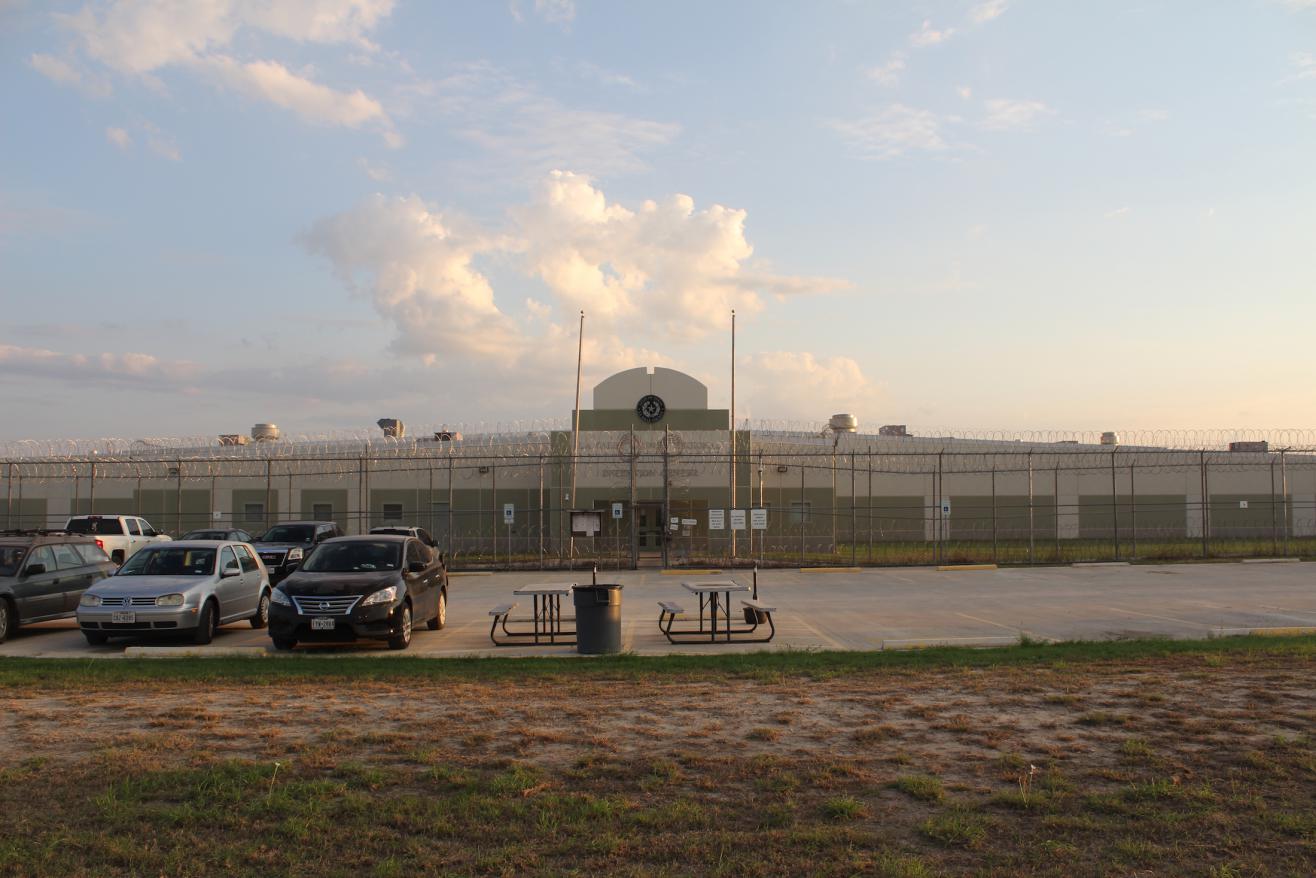 In mid-October, we visited the La Salle County Regional Detention Center in Encinal, a small town of about 600 residents located at the juncture of I-35 and Highway 44, about 40 miles from the border. Our guide, who had worked as an administrator at the center since it opened in 2004, led us through a white cinderblock maze of hallways, passing through dorms, a kitchen, a break room, the medical center, the library, a storage room, the barbershop, and the chapel, which were nearly identical in their materials and configuration, only distinguishable by their size and the types of industrial-grade furniture that filled them. At the time of our visit, half of the dorms stood empty—the center was in the process of rebuilding to full capacity after Emerald Companies, the private operator who had run the center since its opening, abruptly abandoned it in March 2015, leaving the economically floundering La Salle county to take on the associated operating costs and responsibilities. While most of the doors and frames had been painted a light mint color, a few were still Emerald’s signature forest green, reflecting La Salle’s tumultuous operational history. The following timeline outlines the history of the center, from the time it was proposed and purchased on bond by a small local interest group, without the formal consent of residents or the local government, to Emerald Companies ultimately canceling their contract, which caused La Salle county to default on their bond and at the same time assume full legal and economic responsibility for the center. June 2000: Private prison speculator Rick Reyes arrives in Encinal and approaches four county commissioners and County Judge Jimmy Patterson, proposing a deal with a private prison company that will bring a new industry and new jobs to the struggling county. These five politicians, with help from Reyes, form the La SalleCounty Public Facilities Detention Corporation (CPFDC), a tax-exempt shell corporation that he promises will protect the county from financial risk and attract aprivate corporation. Over the course of the next two years, the members of this shell corporation work with the U.S. Marshals Service, Emerald Companies, and bondholders to raise over 20 million in private bonds. Because of their positions within the local government, the CPFDC members are able to “approve” a number of legal documents without the consent of citizens or other government members who might be opposed to the project

September 2002: The bonds are issued and the CPFDC breaks ground on a 500-bed, 100-acre, male and female detention facility. This is the first time most of the townspeople in Encinal have heard of the project, and they immediately oppose it on the grounds of lack of transparency, strains on public utility infrastructures, and concerns about the possibility of Emerald canceling their contract and leaving thecounty responsible for operations. They begin to take action to stop construction. December 2002: The U.S. Marshals Service stops funding and put construction on hold due to the high volume of citizen complaints.

January 2003: Over the course of 2003, a flurry of lawsuits circulates between a concerned citizens group, the CPFDC, and government actors who oppose the prison. All lawsuits are settled out of court, leaving the county government saddled with over $50,000 of legal fees. Local citizens gain better transparency about theproject, but ultimate decisions are still determined by the CPFDC. March 2003: County Commissioners (who are also CPFDC members) vote legally in favor of construction and funds are unfrozen.

2004- 2015: Emerald operates the detention at a profit before going into decline starting in 2012. In March 2015 Emerald canceled their contract, causing the county the default on their bond and become responsible for all inmates and operations. Encinal’s story is representative of that of many small, isolated Texas towns that built private detention centers in the early 2000s in the hopes of bolstering struggling economies, but are now facing the challenges of working with unreliable contractors and unstable, often illegal financing structures in a changing immigration landscape. At the time of our visit in October 2015, La Salle was still in the process of recovering from the fallout, adjusting to new government operational and funding policies. While our guide seemed hopeful that public ownership would provide more stability for the center and its employees, it was offering its detainees a bare minimum of resources, and it was still unclear whether this shift will result in more democratic control of the center.