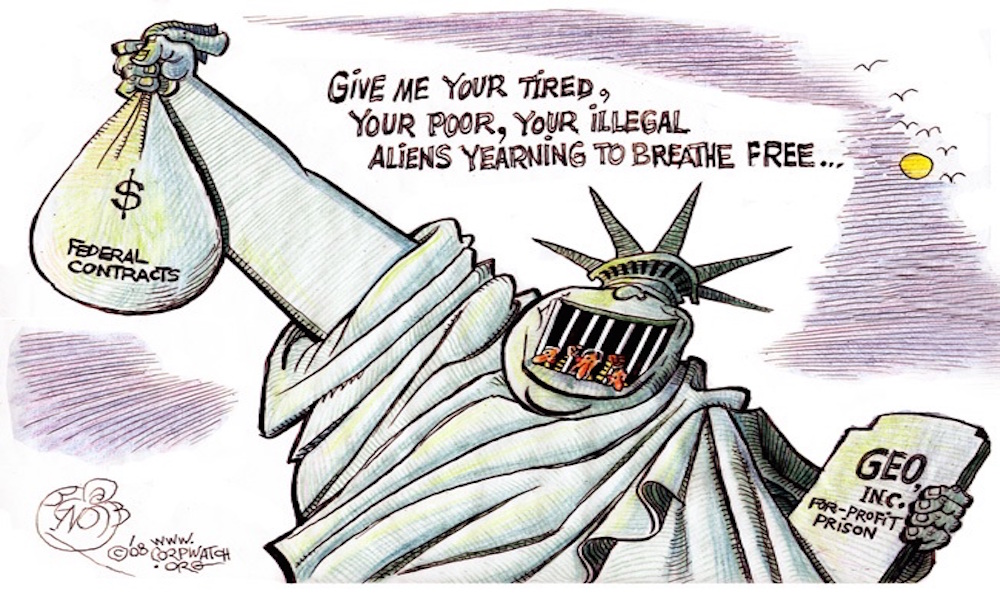 The federal prison population has spiked over 790 percent since 1980. Hundreds of jails have been constructed nation wide. With the conservative war on drugs and crime, the prison industry became a new opportunity for corporations to profit from the states. Since the early1990s corporate actors became entrenched in elections and the political process, seeking to facilitate the construction of prisons and detention facilities by developing connections and asserting influence over politicians and other policy officials.

The GEO Group and the Corrections Corporation of America (CCA) are the two largest private prison companies in the U.S. Since 2000, they have given over $835,000 combined to candidates in U.S. House and Senate races. At the statewide level, these contributions have beeneven higher, with over $6 million spent on state candidates in the same time span. Spending has been concentrated on candidates of both parties, and particularly in states with immigration concerns and large populations (such as Florida, Georgia, and California). Spending on lobbyinghas also increased; most notably CCA has spent nearly $1 million annually on lobbying federalofficials and agencies on policy. In addition, many former government officials have entered intohigh level positions within the private prison industry. Presidential candidate Gov. John Kasich(R-OH), whose former company Lehman Brothers had long-standing contracts with CCA, developed a plan to privatize prisons in Ohio as soon as he took office in 2011. Supported by theSupreme Court ruling in Citizens United v. FEC, the prison industrial complex has altered ourpolitical system. By developing policies intended to criminalize and incarcerate vulnerable populations, the government and private prison industry have effectively.

Immigration detention facilities have followed a nearly identical pattern in terms of how privatization has influenced policy debates and reform. Non-citizens, like others who are or have been incarcerated, can’t vote. Over 5.3 million Americans with a criminal record have lost the right to vote. Additionally, undocumented immigrants do not have the right to vote in the U.S. The prison industrial complex has tarnished the democratic tradition of the United States. The corporate influence of the private prison industry created a disregard for human rights and contributes to the selective criminalization of victims in a police state. Ultimately, government detention facilities serve as gatekeeper tools against those seeking entry and re-entry into society. Effectively these policies deny democratic rights and justice while maintaining a conservativesocio-economic cohesive identity centered on corporate and racial identity.